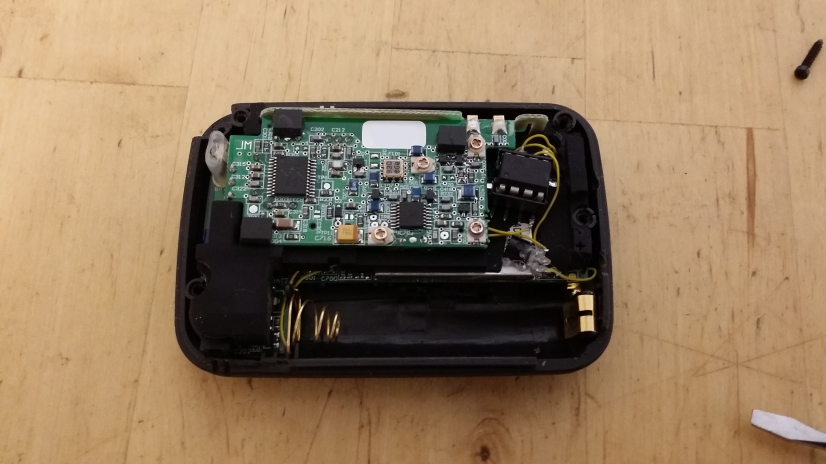 Eye of the Pager

I was inspired after the success with the Sunrise Alarm Clock v2.0 to add additional functionality to other household devices. Next stop: the pager.

Everyone hates their pager because of that obnoxious BEEP BEEP BEEP. But what if it played something soothing and melodic? Something comforting yet inspiring? Something like… EYE OF THE TIGER.

The premise was the same as the Sunrise project. Tap into an existing signal, then add a little something extra on top. In this case, the signal was for the small vibrating motor for “silent mode.” I removed the motor, and tapped into the signal. Although in theory you don’t have to remove the motor, for a 8-pin DIP plus a socket, I had to free up some space.

Below is the take-down and opening of the pager. It requires a size 7 Torx screwdriver as well as a simple flat-head screwdriver. Remove the battery, remove the screws with the torx, then using the flat-head, pop the tab in the battery compartment. From there, you can open the case and separate out the components. I hijacked the vibrating motor for space and for signal detection, and additionally I had to bite off some of the internal plastic to fit the chip and a 8-pin chip socket (so I can easily remove and reprogram it).

The brains of this operation is an Attiny-85, an 8 pin chip with 8 kilobytes of memory capable of digital and analog input/output. The Attiny needs at least 1.8V, but the pager runs off a single AA battery, which at best puts out about 1.5V (unless you go Lithium, but that’s not really practical). Looking at the system, I didn’t want to throw in a voltage regulator, and I found it hard to believe that these digital chips could run off only 1.5V. With a little of probing I found a couple of empty internal terminals pads that put out 3V, so I used that as the VCC for the Attiny.

As input, I ran a piece of 28G wire from the motor pad for vibrating motor to an analog input. The system listens for an increase in voltage through Pin 2 (analog input), indicating that the motor was supposed to be activated, which then initiates the program.

Initially, I just ran a digital output line directly to the speaker from the Attiny, but the sound was a little too weak. I tried making an amplifier using the same pad as the Attiny VCC and a transistor, but the transistor drew too much power and would reset the system every time it tried to run the speaker. The same thing happened with the transistor and directly going to the battery, so I explored and found another internal 3V terminal pad, which apparently was not directly connected the 3V terminal that I used for the Attiny VCC. This was connected to a 2N2222 transistor. I probably could have just throw a resistor in there, but I was really trying to minimize the number of parts going into the system. So the Attiny digital out as the base for the NPN, and the collector was the 3V terminal, and the emitter went to the speaker.

For the program itself, I used the Arduino IDE, configured for Attiny. First step is to hook the hardware to the computer. I used a Tiny AVR board from Sparkfun, which hooks a computer via USB. To run the IDE with the Attiny, you need the drivers for your system. For the song Eye of the Tiger, I just pulled some of the piano music, and reconstructed it from there, but it’s not perfect.

The program itself is based on the TinyTone program, which I modified a bit. I added a bit to put it into sleep mode, so that it checks for a signal about once per second, then sleeps the rest of the time. For reference, the program I wrote is here: tiger_eye.

The measured power consumption through the chip when it’s booting is approximately 0.3uA, when it’s beeping it takes about 1.2uA, and when it’s sleeping I get 0.0 uA on my ammeter. Since a typically AA battery has about 2000-3000 milliamp hours, even if the chip ran at max continuously for 10 hours, it would still only pull about 1/100,000 of the available power. Since the system only beeps about 10 times total per day, for roughly 5s each, we can say the added draw of the chip is negligible compared to the draw required to run the rest of the pager hardware.

Final video of the Eye of the Pager:

Further work:
– SMD rather than through-hole Attiny85. With the socket, the setup is very large, and I had to take out some plastic as well as the vibrating motor. I think I could revise it and leave the motor in if I used an SMD, although soldering and programming would be more difficult.
– More songs. Right now I just have Eye of the Tiger and Jeopardy. Ringtone libraries with code are available all over the place.
– A modification of the Annoy-A-Tron could be fun.